Greg Reynolds, Board of Directors 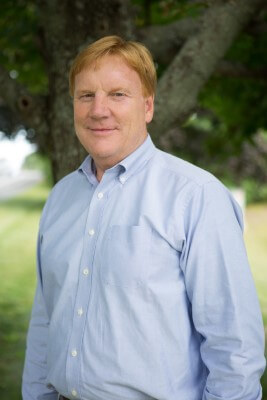 You might say that Greg Reynolds was born into the Electrical Industry. He learned about the industry as a young boy, having grown up with a father who was a factory sales rep. Discussions around the dinner table usually involved conversations with his Dad about the sales calls he made that day to distributors throughout New England. Greg has said that his Dad was his biggest mentor – having travelled with him on many a sales call, he learned from the best. After graduating from West Virginia University with a business degree, naturally his first job was in sales. In a few short years, he answered an ad for a sales position with an Electrical Manufacturers’ Rep in New England. It didn’t take long for him to realize that eventually he wanted to start his own agency.

In 1987, he was approached by the President of Allied Moulded Products, who asked him to rep their line and that’s when he started the Agency. Several years later, he met Peter Flynn, a friendly competitor, and the two merged their agencies to become Flynn & Reynolds Agency. All these years later, the agency still proudly represents Allied Moulded Products. Many lines in the electrical industry have had the confidence in Flynn & Reynolds’ ability to represent their lines for more than two decades, in part due to the solid leadership that Greg brings to the company. We align ourselves with manufacturers who support the partnership required when capturing markets with the use of Manufacturer Representatives, with emphasis on end-user demand.

As the Principal and one of the main driving forces behind Flynn & Reynolds Agency, Greg is responsible for establishing the goals and strategies of the company and the implementation of these goals as well as setting the overall direction of the company. His belief in ethical business practices, has earned Flynn & Reynolds the trust and respect of our customers and has allowed our business to thrive.

In 2002, Greg was the recipient of the Gem Rising Star Award for Independent Manufacturers’ Representatives. Well-known and respected throughout the industry, Greg’s knowledge and experience led him to the role of Chairman of NEMRA (National Electrical Manufacturers Representative Association) in 2013-2014.

Greg has been married to Janice for over 30 years and are the proud parents of three grown daughters. Their family especially looks forward to their time in New Hampshire skiing, hiking and anything else the great outdoors has to offer.